Below are some of the highlights. The team's facebook page has many more pictures.
The 2016-17 Copper Hills Wrestling Season results (including most JV tournament results) are on TrackWrestling under Seasons (search or use the links above).

Congrats to our 2017 state qualifiers. Mason was pulled into the tournament from the 1st alternate position. He also snapped a great shot of the four wrestlers on the mat during warm-ups. All were hampered by injuries and it would have been awesome to see them wrestle at full strength for both days. Huge shout out to these wrestlers and their coaches for finishing the season strong. 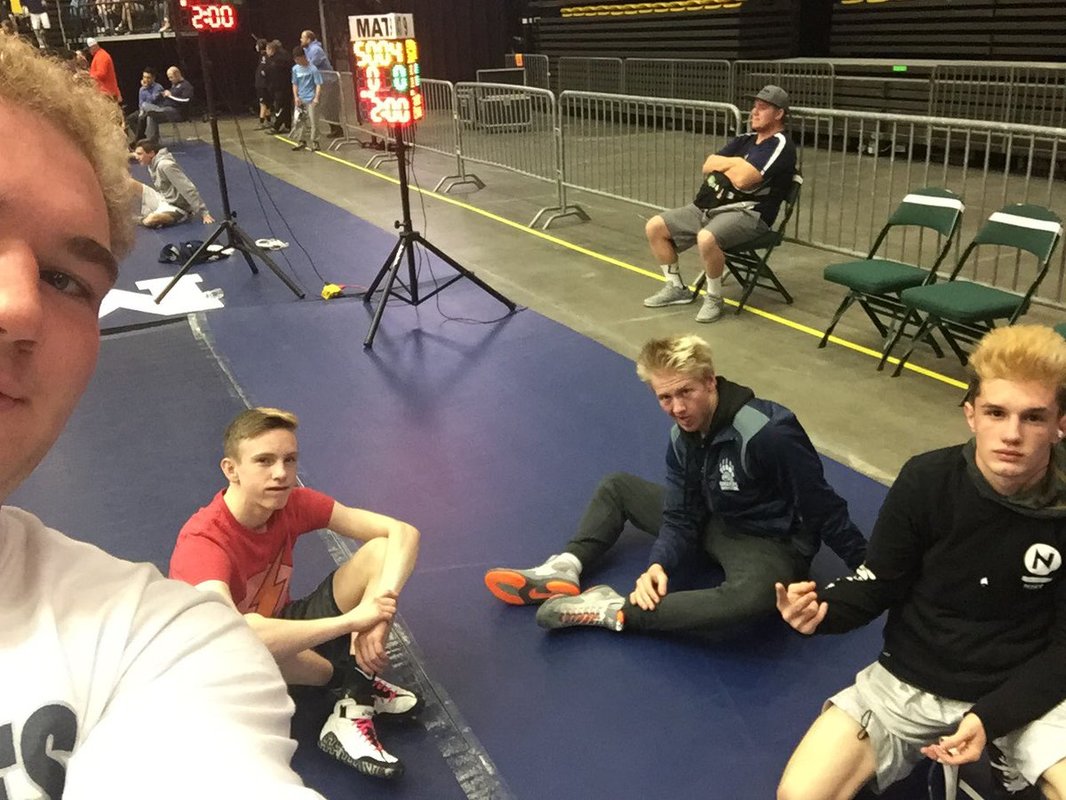 Jazmin Herrera your 160 lbs Girls State Champion, pinned a Fargo All-American in her final match of the season to clinch the championship!!
Way to go Jazmin!! 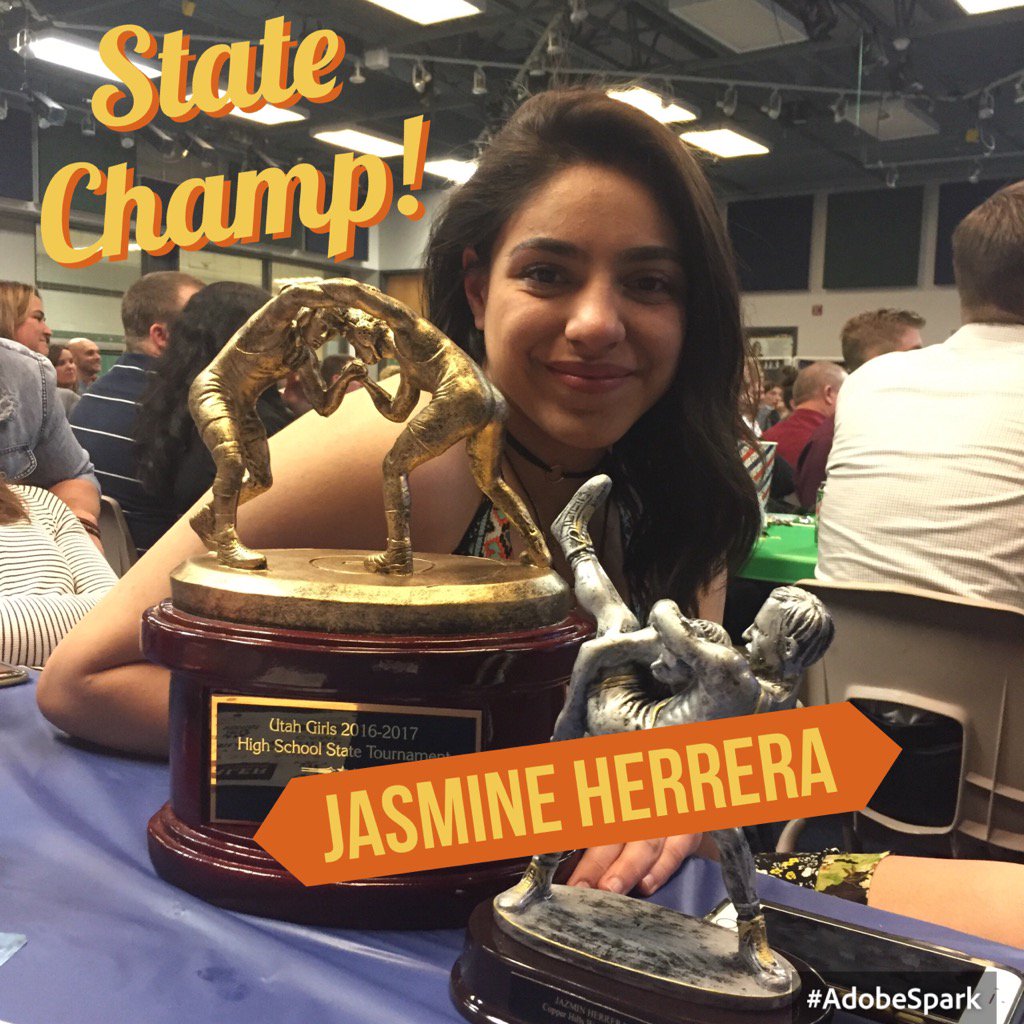 Copper Hills had a good showing at the JV State tournaments, with a 5th Place Team finish, a JV State Champ and JV State Runner-up as well as the following JV State placers:

After losing five wrestlers to injury in the last weeks of the season, and getting hit with a few more injuries at the Divisional tournament, Copper Hills was still able to send 3 wrestlers to state, with Mason Van Wagonen sitting in the 1st alternate position (9th Place at Divisionals) at 220 lbs. Additionally, two other wrestlers made it to the 2nd day competition -- Dakota Larsen finished out in 10th place at 138lbs and Hunter Shaw placed 11th at Heavyweight. 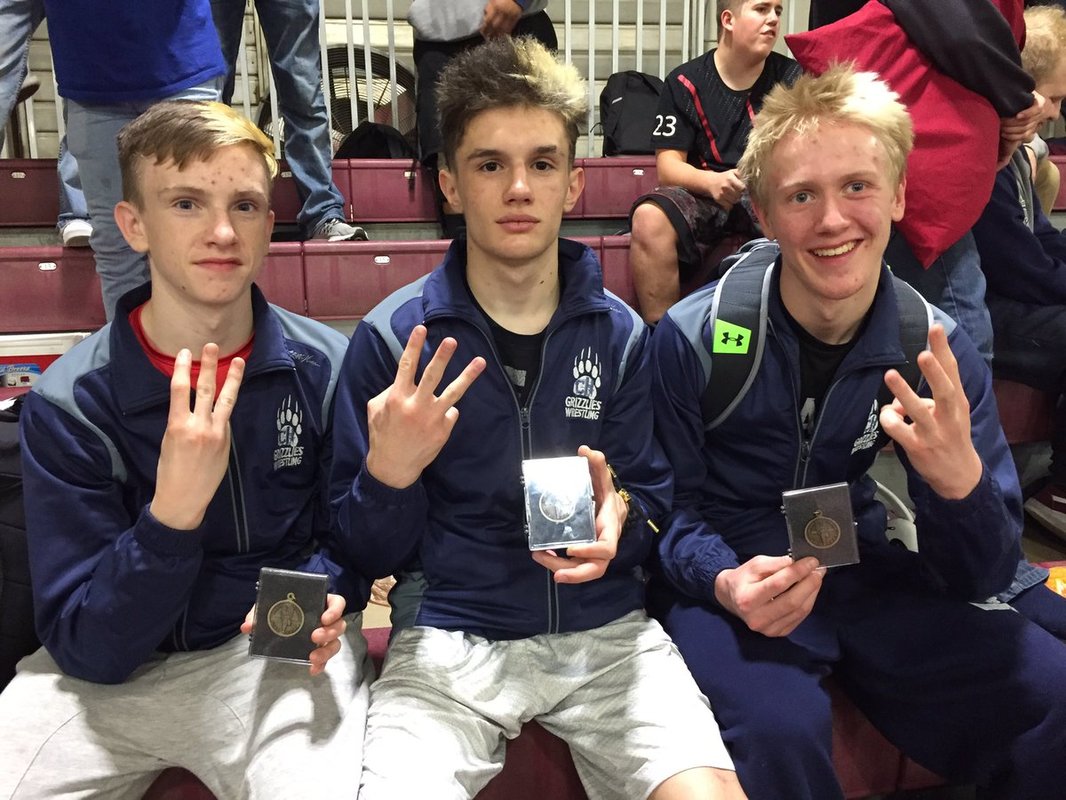 Copper Hills won their final region dual of the season on Wednesday, Jan 18th at Copper Hills by a score of 50-27 over Brighton HS. This clinched the region title for the Grizzlies, despite an early season unexpected loss to Taylorsville. 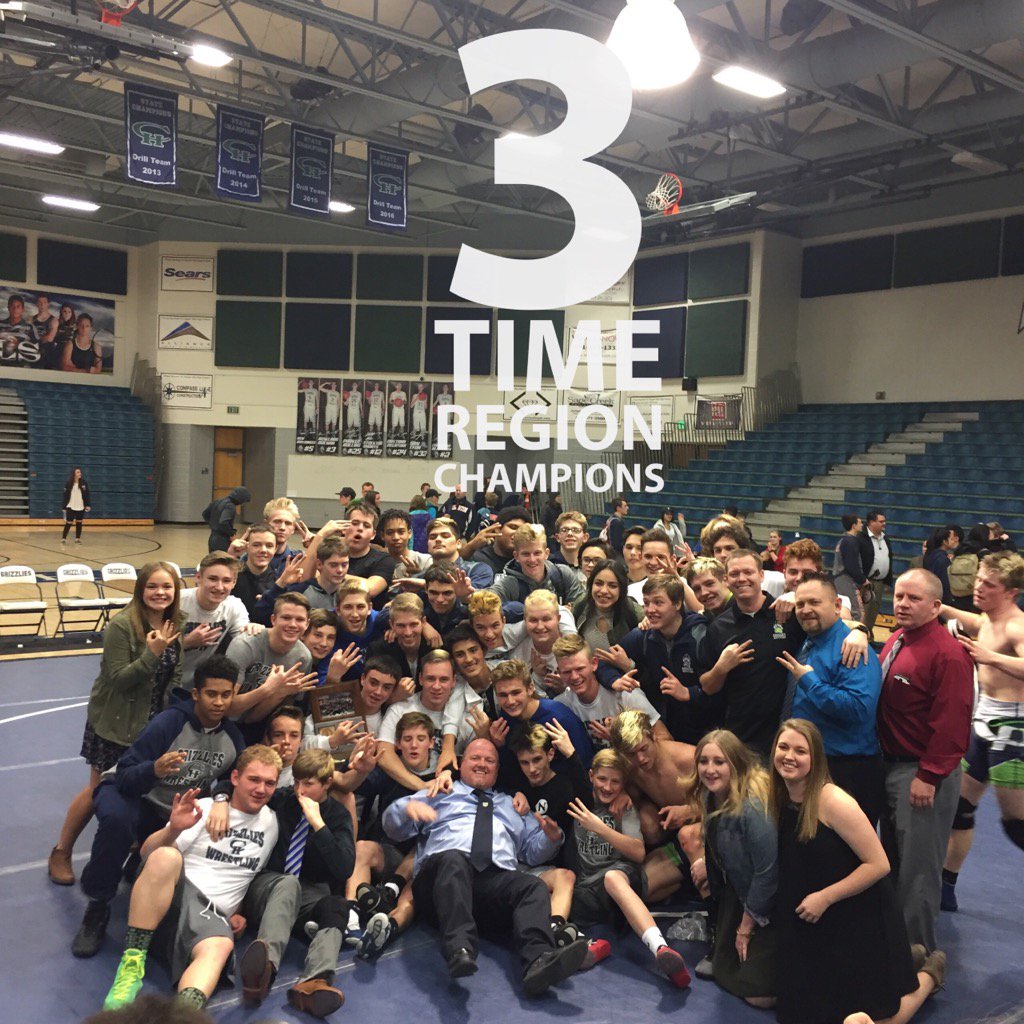 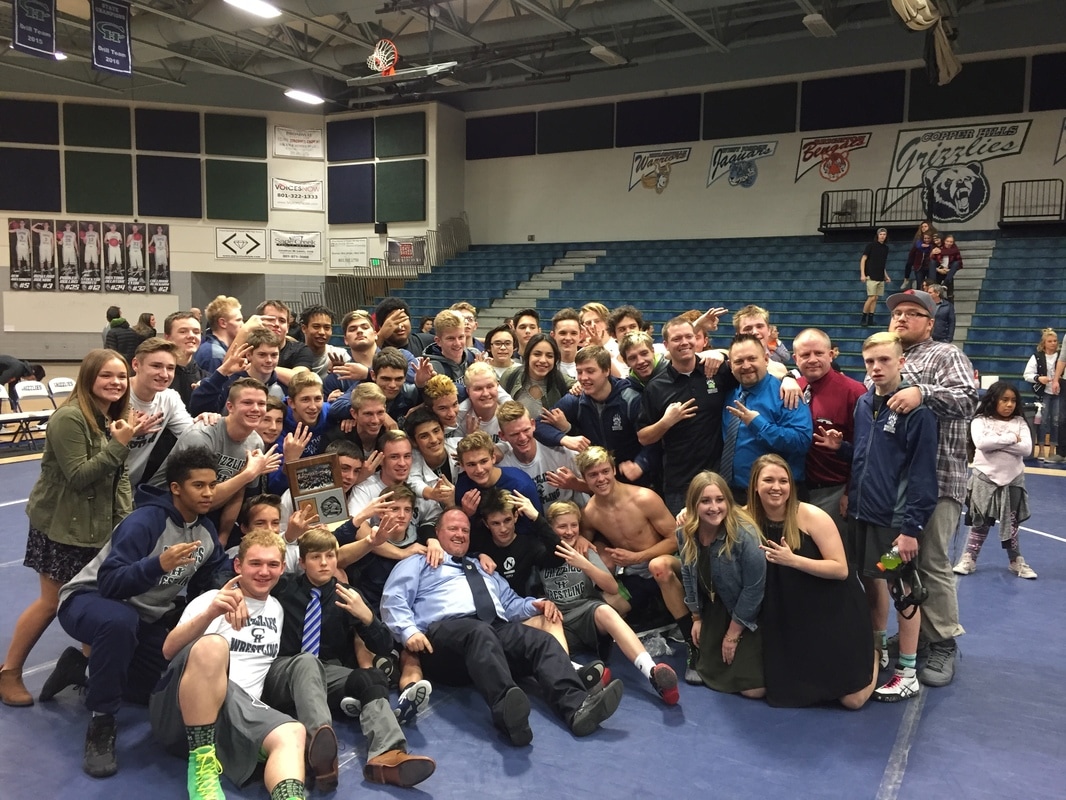 Copper Hills won their region dual on Wednesday, Jan 11th at Copper Hills by a score of 42-32 over Jordan HS. After some close losses and an upsetting win for Jordan on a referee's decision, David Munsey (11) and Ryan Johnson (11) turned the tide by both getting quick 1st period pins. Spencer Wheeler (12) capped off the night with a pin at 145 lbs in his first match of the season after returning from an injury.

Copper Hills won their region dual on Thursday, Jan 5th at Copper Hills by a score of 66-15 over West Jordan HS.

Copper Hills won their last region dual of 2016 on Wednesday, Dec 21st at Bingham by a score of 33-32. It was a close contest throughout the night and came down to the final match at 145lbs.  Down by 4 team points and needing a technical fall or pin to win the dual, Brady Foard finished off the night with tech. fall (16-1) scoring 5 team points for Copper Hills. This kept the team's hopes of a 3rd region championship alive after their earlier season loss to Taylorsville.

Copper Hills lost their 2nd region dual of the season at Taylorsville on Thursday, Dec 15th by a score of 33-37. Despite notching some pins at the lower and upper weights, Copper Hills gave up a few pins as well and lost some close matches that could have swung the dual in their favor. Because Taylorsville lost to Bingham, Copper Hills hopes of a 3rd region title are still alive and the team is working hard to prepare for the rest of the region dual season.

Copper Hills fell to a tough North Summit squad on Tuesday, December 13th in Coalville by a score of 19-49.

Copper Hills faced a small Cottonwood squad (only 6 wrestlers) on Thursday, December 8th at Cottonwood HS. This gave several JV wrestlers a chance to wrestle in their first Varsity match leading to a final score of 54-30 in Copper Hills favor.

Riverton returned the Rock to Copper Hills on Tuesday, November 22nd.
The Grizzlies kicked off the 2016-2017 season with a 60-22 victory @Riverton HS, recording 9 pins (6 pts ea.) and 1 technical fall (5 pts) on the night. The scored landed at 60 because Copper Hills received 1 penalty point when a Riverton wrestler tossed his headgear after his loss. There was a lot of energy in the building as some young wrestlers got key victories for the Grizzlies. Thanks to Chris Scott for putting together photo albums for the team. Here is the direct link to the Riverton Dual photos. 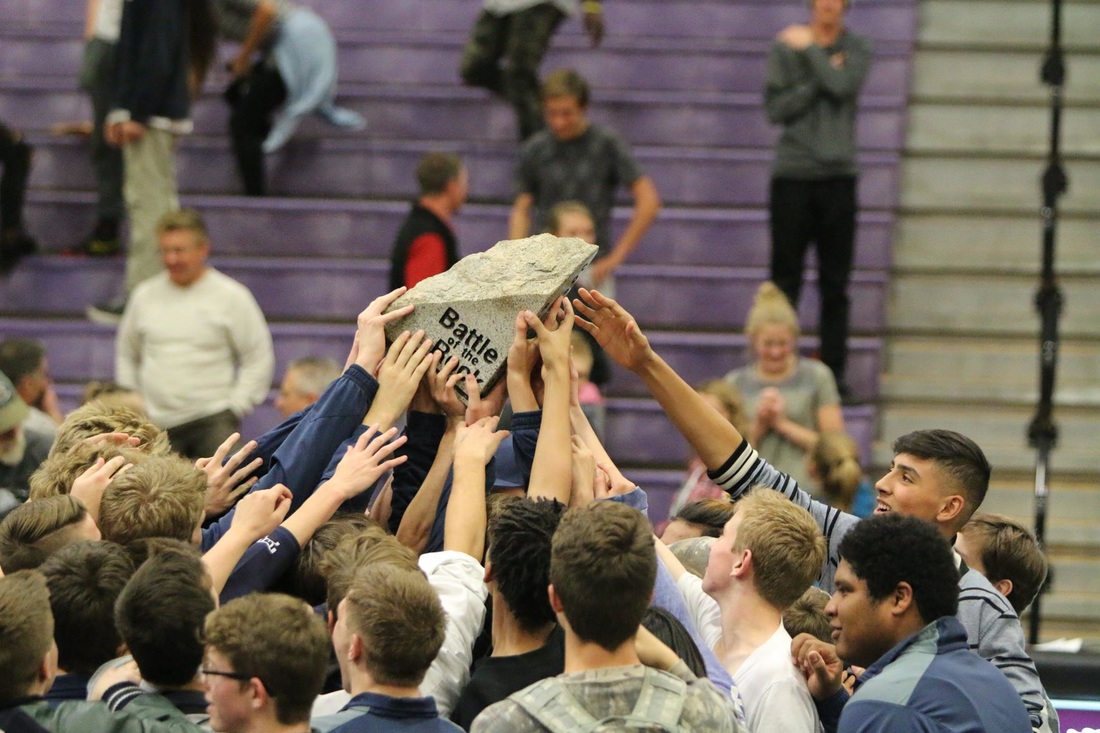 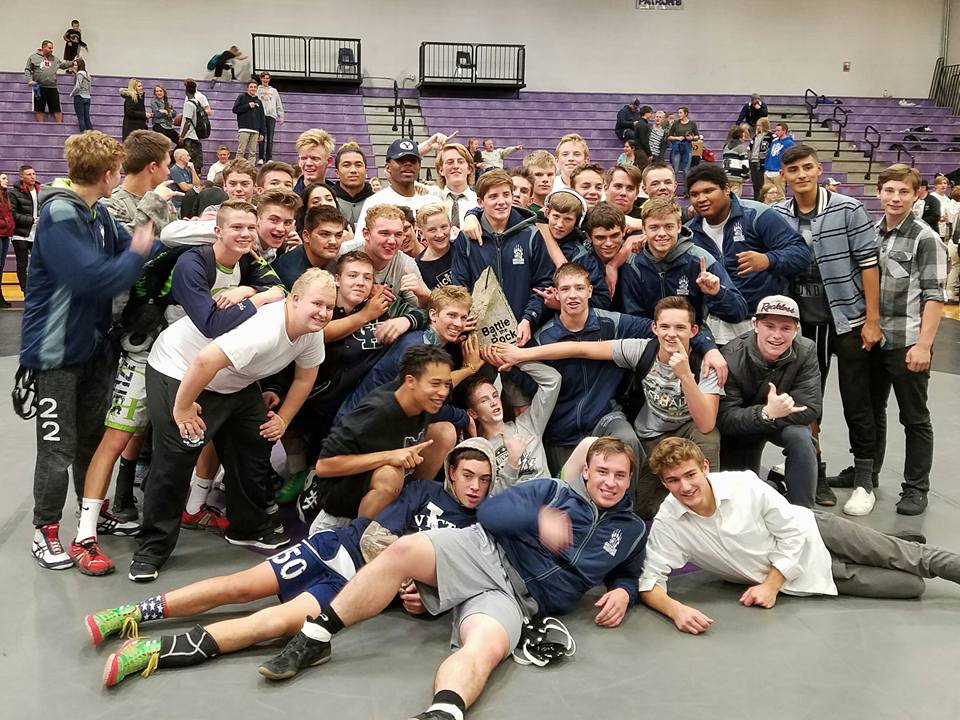 Copper Hills hosted the tournament and was disappointed to learn that several schools only sent a few participants.  But, this meant that Grizzlies got to wrestle off against some of their own teammates in key matches in the tournament.

Copper Hills lost against Weber and then against Herriman. More importantly, they lost Joey Harris to a knee injury in the Herriman dual.

Had a good showing at the tournament, including strong performances in the JV tournament. The team suffered another loss at 132 pounds as Ryan Johnson, not only lost a tooth (which he also picked up during the match and kept wrestling), but he ended up with a hairline fracture in his jaw putting him out for the season.

Had a good showing at the tournament, including a first place finish in the Hard Luck tournament.

The Copper Hills varsity wrestling squad got off to a great start on the first day of the 2016 Juab Winter Classic dual meet tournament by defeating Monticello and American Fork to win their preliminary pool. This put the Grizzlies into the Gold Pool for a guaranteed top 8 finish out of the 24 teams competing in the tournament. Copper Hills put in some hard work against the strong teams in the Gold Pool, beating North Summit, the 2nd Place finisher at the tournament, by a score of 42-35. But, that ended up being the Grizzlies only win.

Despite only having 1 dual meet win, the Grizzly wrestlers put in strong performances throughout the tournament, narrowly missing a 6th place (by 3 points) as the team fell to Altamont (7th Place) by a score of 39-40 and to Fremont (6th Place) by a score of 36-38. Despite the losses, the wrestlers gained valuable experience for the season as all teams in the Gold Pool but one finished in the top 6 at the state championships last year. Fremont, who finished behind Copper Hills (9th Place) in 11th Place at last year's 5A championships, is ranked #2 as a team in pre-season polls this year.

The Grizzlies kicked off the 2016-2017 tournament season with a nice showing at the Skyhawk Showdown @Salem Hills high school. Both JV and Varsity wrestlers competed hard with victories and strong showings in both divisions. Full results can be found on Track Wrestling (browse for tournaments and then search for "Skyhawk").

Thanks to Chris Scott for putting together photo albums for the team. Photos are usually posted within a week of the event!